A Knights Example of Obedience 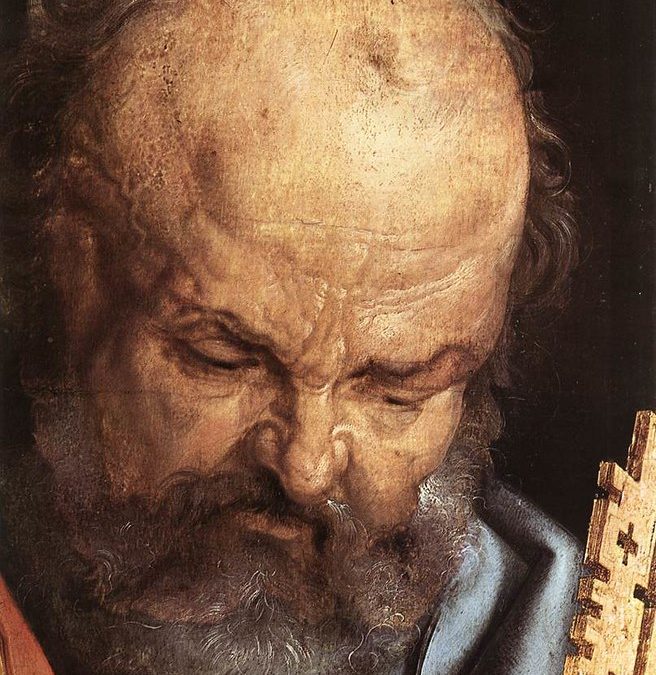 Throughout the Church yesterday we celebrated the Feast of the Chair of St. Peter. Reflecting on the readings and prayers of the day, it provides another example of obedience to Christ for Knights to follow in their journey of faith.

Our first example is Christ himself. We are called by our position in the Church to be the hands and feet of Christ, since he no longer has an earthly body. We are that presence. The call to live our lives in His example and care for the sick, foster the orphan and widowed, provide for the poor. His presence in the Blessed Sacrament of the Altar calls us into the reverent and holy Knighthood that we profess.

Our patronage, St. John the Baptist provides a another example for us to live our lives. That every thought, word, and action be offered in the memory of him, the holy martyr of the faith. More importantly, we are to act like John, and be the voice in the wilderness, crying out to prepare the way of the Lord. Scripture calls us to walk humbly with God (Micah 6:8). Living our lives like St. John the Baptist allows us to decrease in our humanly nature, and allow Christ to ever increase in the world.

Read More – The Beheading of John the Baptist

Mary provides another great example of obedience. From her unwavering fiat at the Annunciation, to her obedience to the divine law in the Presentation, she provides us an example of piety and obedience unrivaled among the saints. Mary is often depicted with images of the moon. The crescent moon present in her iconography signifies her glory and her assistance in the victory over time and space. The moon also does not have its own source of light, but rather reflects the light of the sun, Mary serves to amplify her Son’s presence in the world.

Joseph’s silent obedience, his examples of masculinity and his care for the Holy Family.  Joseph’s acceptance of his position in the plan of salvation is our model of virtue and discernment.

A Knight in the Shadows

And then there is Peter. Peter’s example is probably one that is most recognizable to how we live our lives. Peter did not find Christ of his own accord, rather it was Andrew who brought him to the Lord, much like we were brought to the faith by our parents or other influence. Peter was not perfect – and often had to be reminded of his place. He denied knowing Christ, not once, not twice, but three times to save himself. This denial a sign of weakness.

Peter needed to be reminded that his wisdom and knowledge came from the Father, and not his own accord. He was the only disciple chastised by Christ and called Satan, an admonishment that Judas didn’t even receive in his act of betrayal. He was also the only disciple to have his name changed, his purpose in the mission of Christ both before and after the Resurrection larger than even what he could imagine.

Through all of his faults and weaknesses however, Peter was still named by Jesus Christ as the leader of the disciples. He received no additional graces, the same powers that Christ bestowed on him were bestowed upon the entire twelve, but Peter was established as their leader and guide, establishing the office of Pope, chosen to preside at the calling of all nations, as Saint Leo the Great explained. It was not a position he asked for, it was a position for which he was chosen.

Like Peter, we all struggle with temptation, sin, and weakness. Through the grace of God we are able to overcome these vices and accept our calling. Like Peter, we must also work at and improve our standing. To remove temptation and sin from our lives. Thankfully, we have a solid playbook to live our lives by. Through the theological virtues of faith, hope, and charity we live our lives; but also allowing the virtues of chastity, temperance, charity, diligence, kindness, patience, and humility we can grow closer to Christ through the grace. A man who practices the virtues in every aspect of his life is a man who tries to avoid the near occasion of sin.

A life of virtue

Love never fails. If there are prophecies, they will be brought to nothing; if tongues, they will cease; if knowledge, it will be brought to nothing.  For we know partially and we prophesy partially,  but when the perfect comes, the partial will pass away.  When I was a child, I used to talk as a child, think as a child, reason as a child; when I became a man, I put aside childish things.  At present we see indistinctly, as in a mirror, but then face to face. At present I know partially; then I shall know fully, as I am fully known. So faith, hope, love remain, these three; but the greatest of these is love.