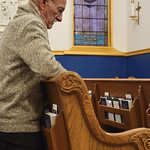 The journey to the promised land, “a land flowing with milk and honey” was not an easy one. That particular land was not easy to occupy because there were other people living there. The Israelites were encountering their first opposition while wandering in the desert. Amalekites, a group of nomadic raiders, attacked the people of Israel. While Joshua led the troops into battle, Moses, along with Aaron and Hur, watched the battle from a nearby hill.

Exodus 17:11 reads, “As long as Moses kept his arms raised, Israel had the advantage, when he let his arms fall, the Amalekites prevailed.” Eventually, Moses became weary, and so Aaron and Hur responded by holding up his arms until the Israelites were able to finally defeat the Amalekites. Israel was threatened with destruction, and they needed to act with all their arsenals. For God’s will to be done in the life of his people, perseverance, fidelity to the covenant, and trustworthy human leadership was needed along with active community defense. It is heart-warming that many people were willing to lend a hand. We all need helping hands at a particular point in our lives. Moses was the primary leader of the Israelites in their Exodus from Egypt, and during their wanderings in the wilderness. He was seen as mediator of the law, a man of heroic deeds. He was a model statesman, confronting the Egyptian Pharaoh and negotiating the release of the Israelites. Moses the shepherd, leading the Israelites through the Sinai Desert. He acted as the conduit of God’s miracles, stretching out his hand to part the Red Sea. Moses the legislator, descending Mount Sinai with two stone tablets containing God’s laws. As the commander in chief, Moses directed all the battles in the wilderness.

Without his leadership, inspiration, and vision – the Israelites would never have made it as far as they did. Our first Reading from the Book of Exodus reveals to us yet another aspect of Moses’ leadership: the willingness to accept the assistance of others. The staff of God represented the power and presence of God in times of need. Moses had the staff of God in his hand, but its power was not immediately fully effective during the battle with the Amalekites. All of us must understand that we cannot do everything by ourselves because even Moses needed a helping hand at a time.

Many Catholics believe that their priests are superhuman, heroes without origin and are endowed with magical powers to solve their own problems and that of their members. The priests are just like Moses, Aaron, Simon Peter, Paul, the Apostles, and the Prophets of old. They also have their own spiritual hills to climb, moral curves to negotiate, emotional problems to deal with and personal storms to weather. They need our constant prayers, daily encouragements and helping hands. The bishops also need the support of their priests and co-workers to steer the business of shepherding the diocese. The letter to the Hebrews is clear on this: “Every high priest chosen from among mortals is put in charge of things pertaining to God on their behalf, to offer gifts and sacrifices for sins” (Hebrews 5:1).  Another surprising detail was when Moses needed help. At a critical moment when the Israelites were confronted with the threat of annihilation and needed urgent help; that was when their leader, Moses also needed support most. Moses’ hands grew weary, the weight of leadership was weighing him down, his strength was waning, he was getting older after all. Fortunately, Moses was not alone. Along with Moses on the top of the hill are Aaron and Hur. Aaron was Moses’ brother, a leader during Israel’s early days and the first of its high priests.

It can happen to us anytime. When the church is in difficulty, when the parish is in crises and the storms become more violent and destructive, when things seem to be falling apart, that is when we need to support the pastoral council, the priests, the bishop, and all those who play shepherding role in the church. When there are problems in the family, let us remember and pray for our parents. When a nation is undergoing turbulence, let us pray for leadership and those who take decisions. Sometimes the people who need the most help are those we think have it all together. When the arms get tired, the work slows down. As Catholics we need to lift up the arms of our pastoral council members, leaders in our various societies, the choir director, Knights and Ladies of the altar, (altar servers) our dedicated ushers, and many others whose hands might be getting weary.

Again, it was a combination of divine and human energies that proved so vital in the victory over the Amalekites. Moses, the Lawgiver, and one of the most powerful leaders in Israel had the staff of God in hand. With the staff of God Moses had performed wonders in Egypt and even instructed Aaron to use his staff for similar purposes (Ex. 4:1-5, 7:8-24, 14:16). There is the need to pray always without ceasing as we heard from the Gospel Reading from Luke, but we also need soldiers on the battlefield. Pray always for your daily bread but work with your hands, pray for long life but be selective with what you eat or drink, follow your heart but do not forget to take your brains with you. The church is a community of praying tongues, and dedicated hearts, but the same church has bills to pay at the end of the month. Prayer is absolutely critical but apart from prayer, what do you need to do? Can prayer alone secure your future. We must never forget that heaven helps those who help themselves. Let us join our hearts and hands in building the Kingdom of God. Amen.