The Sound of Silence and the Triduum 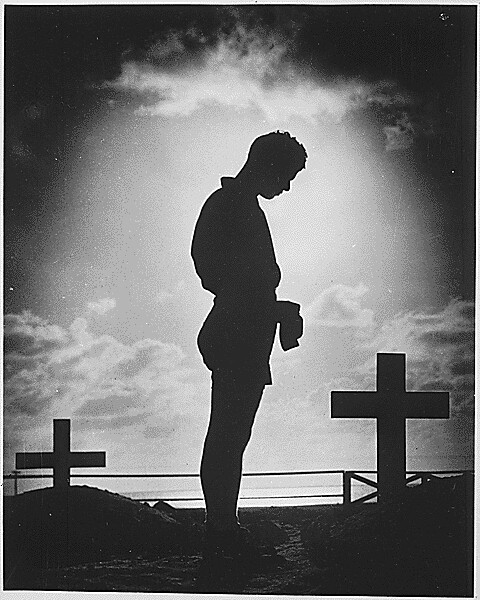 In 1964, a duo formed and released a song called the Sound of Silence. Deemed to be a flop, the duo, Simon and Garfunkel initially split up. Coming back together two years later to become one of the best selling groups in the 1960’s. There have been many theories as to why Paul Simon wrote this song, with it rumored to be about the JFK assassination or the Vietnam War; but evidence has also been presented to the contrary. Garfunkel once said that it was about a peoples’ inability to communicate, both internationally and emotionally – so what you are seeing is people unable to love each other.

You can almost hear the prayer like nature of the lyrics if you place the context of the song to our faith as Catholic Men. The very first line of the song starts out, “Hello darkness, my old friend.” As Catholic men, we should not fear the dark. In fact, when Jesus gave instructions to the twelve on how they should pray, he encouraged them to find a dark place (Matthew 6:6).

While this says nothing about darkness, consider the lack of natural light that might be in a first century home, and even less would be found in an inner room of a house. Christ is also not just referring to a physical location, but urging us to pray in a way that is as distraction free as possible.

The second line could allude back to that same passage of Matthew, “I’ve come to talk to you again.” As we should pray without ceasing, this line could allude to the constant need to be in communication with God. An interesting fact, Paul Simon claims to have written the song in his bathroom, with the light off.

How many times in an argument are we accused of just saying things; or not actually hearing what the other party is saying? How often have our prayers been empty words like the pagans (Matthew 6:7)?

As we enter into the heart of our liturgical year, the solemn Triduum, there is one element that must stand out in us as knights, and that is silence. For only in silence can we hear and appreciate what God is saying to us – and actually hear what our response ought to be. The Triduum is marked by silence. Bells and organ music are encouraged during the Gloria on Holy Thursday, but as soon as the hymn is complete, those instruments are to be silent until the Easter Vigil proclamation of the Gloria.

The Mass of the Lord’s Supper celebrated on Holy Thursday ends in silence, the services on Good Friday begin and end in silence. 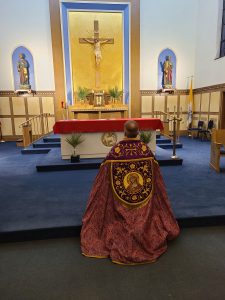 Deacon Dan Ulmer (Comm. 135) in prayer at the foot of the altar at commanderies home parish of St. Andrew’s following Stations of the Cross.

Where is the value in silence?

Arguments against religion point to the silence of God as an absence, or non-existence. They would argue that our prayers and adoration are akin to standing at the door of an empty house, ringing the door bell, only to have the sounds fall on emptiness. Our silence in the Triduum is the capstone of our sacrifice throughout Lent. Much to the chagrin of the atheist or anti-God crowd, silence does not weaken the argument for God, if anything it brings us closer to him. How is that?

Consider the numerous social clichés that discuss similarity/difference. Absence makes the heart grow fonder. Familiarity breeds contempt. When does water taste the best, or food most fulfilling? When we are the thirstiest or hungriest. There is a common denominator to these statements, deprivation. Deprivation brings out a greater desire. Our Lenten sacrifice should act as a reminder, not of what we have sacrificed, but to the point of why we have abstained from that activity or favorite item.

I don’t often like remakes, as the originals will usually stand the test of time, but I feel that the emotion and passion in this version speak more eloquently for our need for appropriate silence.

As we reverently stand guard at the altar of repose, reflect on that sacred silence. If you pilgrimage to seven churches following the Mass of the Lord’s Supper, maintain your silence even in transit. Our silence over the Triduum can stand with the Sorrows that Mary must have felt, as her son lay in his tomb, so that the rejoicing for the resurrection is even greater.