Following the traditional Roman Calendar, today the Church celebrates the Seven Sorrows of the Blessed Virgin Mary. For those following the modern calendar, we celebrate the Feast of the Seven Sorrows on September 15th. As we are nearing the end of the penitential season of Lent and begin the holiest week of the Church year, this day on the calendar can serve as a reminder to all knights.

Devotion to Our Lady of Sorrows became a standard devotion in the Church sometime around the 14th century, and was revealed to S. Bridget of Sweden. Mary suffered alongside her son with the bitterness that only a mother can. The seven sorrows are:

The Prophecy of Simeon

..and Simeon blessed them and said to Mary his mother, “Behold, this child is destined for the fall and rise of many in Israel, and to be a sign that will be contradicted (and you yourself a sword will pierce) so that the thoughts of many hearts may be revealed.”  –Luke 2:34-35

The Flight into Egypt

When they had departed, behold the angel of the Lord appeared to Joseph in a dream and said, “Rise, take the child and his mother, flee to Egypt, and stay there until I tell you. Herod is going to search for the child to destroy him. Joseph rose and took the child and his mother by night and departed for Egypt. He stayed there until the death of Herod, that what the Lord had said through the prophet might be fulfilled, “Out of Egypt I called my son.” –Matthew 2:13-15.

The Loss of Jesus for Three Days

Each year his parents went to Jerusalem for the feast of Passover, and when he was twelve years old, they went up according to festival custom. After they had completed its days, as they were returning, the boy Jesus remained behind in Jerusalem, but his parents did not know it. Thinking he was in the caravan, they journeyed for a day and looked for him among their relatives and acquaintances, but not finding him, they returned to Jerusalem to look for him.

After three days they found him in the temple, sitting in the midst of the teachers, listening to them and asking them questions, and all who heard him were astounded as his understanding and his answers. When his parents aw him, they were astonished, and his mother said to him, “Son, why have you done this to us? Your father and I have been looking for you with great anxiety.” –Luke 2:41-48

The Carrying of the Cross

and carrying the cross himself, he went to what is called the Place of the Skull, in Hebrew, Golgotha. –John 19:17

The Crucifixion of Jesus

There they crucified him, and with him two others, one on either side, with Jesus in the middle. –John 19:18

Jesus Taken Down from the Cross

They took the body of Jesus and bound it with burial clothes along with the spices, according to the Jewish burial custom. –John 19:40

Jesus Laid in the Tomb

Now in the place where he had been crucified there was a garden, and in the garden a new tomb, in which no one had yet been buried. So they laid Jesus there because of the Jewish preparation day; for the tomb was close by. -John 19:41-42

There are indulgences and promises that go along with the devotions to the Seven Sorrows of the Blessed Virgin Mary.

There are three tenants that knights can rely on to increase their virtuous and heroic lifestyle choices as Knights of the Roman Catholic Church. 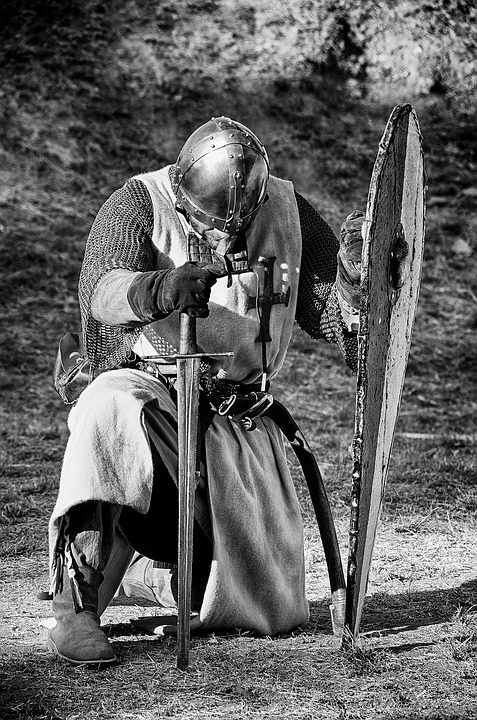 One of the spiritual works of mercy is to comfort the sorrowful. While Mary enjoys the comfort of knowing that her Son has risen from the dead, and she is enthroned by virtue of her assumption, her sorrows are still felt by those of us who remain on earth who are left to endure suffering and death as she did. A virtuous knight should do everything in his power to comfort those who have experienced loss. By recalling our own sins and reminding ourselves of the suffering that Mary would have endured, we will have a greater share in the glory of heaven when one day we ourselves enjoy citizenship in the Kingdom of Heaven.

Knights can comfort the widows of our members who have gone to rest with the Lord by continuing to include them in our activities and liturgies.

Knights can also comfort the widow of parishioners – assisting with parish bereavement ministries. Another opportunity for Knights to assist with the comforting of the widows of the parish, if at all possible would be to have one knight turnout in uniform at a funeral, to act as an escort to the grieving widow.

The Feast of the Annunciation

As men, we can also learn from the strength and fortitude that Mary must have had to endure these major events in the life of her son. While she knew what was in store for Jesus from the moment of the Annunciation – the emotions and heartbreak must have been almost too much to bear. We can gain strength from dedicating our lives to the church and devoting ourselves to meditating on the seven sorrows.

As our Lenten journey enters Holy Week, may the Seven Sorrows of the Blessed Virgin Mary strengthen your virtues.