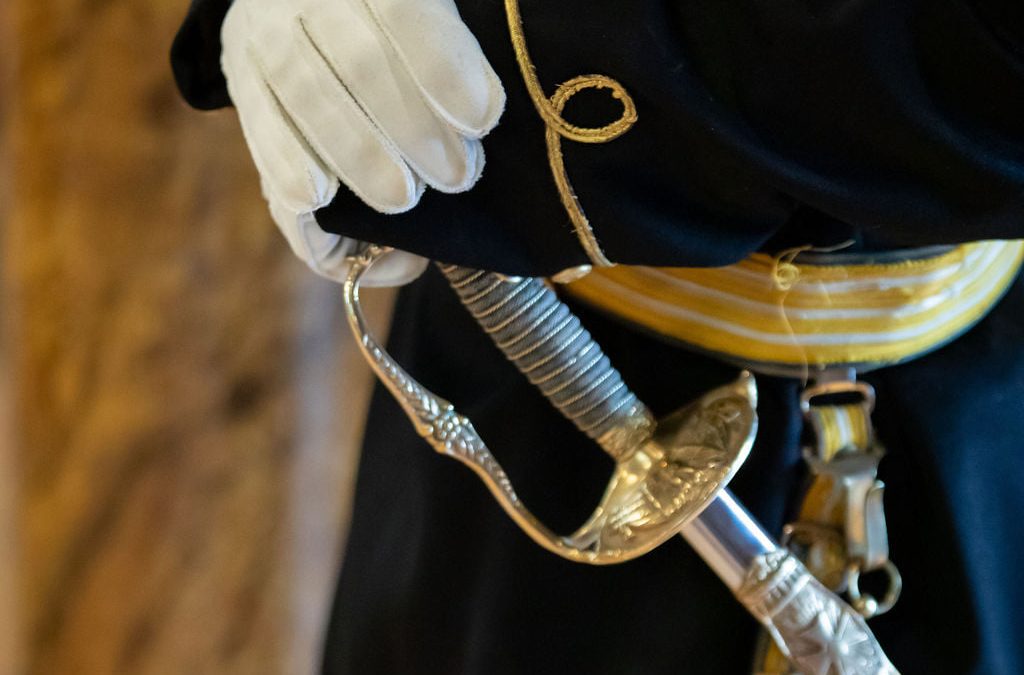 As the warmth of late Spring expresses itself outside, the entrance procession at the beginning of mass along the main aisle at St. John Cantius Church includes figures that the city had never before seen; from the elaborately plumed chapeaus at the top to the “KSJ” engraved buckles and brass moving downward. The men of the Knights of St. John have at last arrived.

Against a trend of decline and decay that fraternal societies, volunteer organizations, and other groups of charitable men have seen for decades, now generations, the Knights of St. John International are seeing growth, with new commanderies establishing more frequently and membership drives in places where it hasn’t been before, like Chicago.

The Knights of St. John is a fraternal order of Roman Catholic men dedicated to the Church through the practice of faith, hope, and charity.  Groups of men form commanderies at individual parishes, serving the Church, the community, and the brotherhood.

For the first time in its history spanning more than 135 years, the Knights have a permanent presence in the windy city, with members working diligently to form a commandery at St. John Cantius, the historic and traditionally Polish parish that itself has seen its own revival recently. 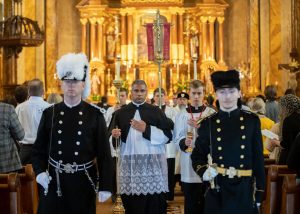 The Knights who are forming at St. John Cantius, currently attached to the Ann Arbor, Michigan, based commandery at St. Thomas the Apostle there, have seen their numbers of interested men, applicants, and members grow quickly in the very short time since their first turnout in early 2021.

“A friend of mine was once asked by St. Theresa of Calcutta, ‘What is the poorest country?’” said Emmons.  “She continued, ‘It’s right here in the United States.’ She went on explaining that the United States was morally poor and had lost its way, but that true Knighthoods could help change that.  Men need other men to keep them strong and to stay on a moral path.”

What is the poorest country?

Emmons believes that the Knights of St. John can do just that.

“A knighthood like the Knights of Saint John helps men stay on the path,” said Emmons.  “To bring them and their families back to church. In a city like Chicago, which has some of the oldest and most beautiful churches, it is also one of the morally poor cities. Many men and parishioners are excited to see a strong and traditional Knighthood come to Chicago.”

The President and commander of St. Thomas the Apostle commandery #973 in Ann Arbor, 1st Lt. Anthony Ryan, feels the same, and says he has seen it in himself.

“Being a Knight of St. John is where I ‘fit’ in the authentic restoration of His Roman church,” says Ryan.   “Within The Order, I can serve as a role model, projecting strength, assurance, and confidence of Our Holy Faith in these times of great scandal, confusion, and apathy.”

It’s through Ryan’s encouragement that the first footholds of the Knights of St. John gained traction in Chicago, having first grown a commandery in Ann Arbor.  In two years, Ryan grew the Knights’ presence there from just himself to a full-sized commandery, driven by the principles and oaths that he says brought him to the Knights initially.

Read More – What Can I do? A Tale of an Inadvertent Roman Knight

Ryan says that the growing influence of the Knights in Chicago has a meaning far beyond that to the order alone.

“Having the Knights of St. John take a foothold in Chicago, with its rich history of Western and Eastern Catholicism, is an axiomatic hub for the future growth and sustainability of our noble order in the 21st century,” says Ryan.

As one of the Knights’ first turnouts at St. John Cantius draws to a close, the men-in-uniform, Emmons and 2nd Lt. Jakub Kubas, draw a multitude of looks of curiosity and interest from the parishioners present.  The traditional uniforms, unchanged since the initiation of the order, just seem to “fit” with the surroundings, as if they were always meant to march the aisle of the Church.  It’s not the uniforms that draw the attention, though, but the outward and unapologetic expression of traditional Catholic values.

You have been told, O mortal, what is good, and what the Lord requires of you: Only to do justice and to love goodness, and to walk humble with your God.

Emmons and his growing team are continuing to show the values the Knights profess even farther beyond Chicago.  In June, he and one of his newest brothers in the Order traveled to Springfield and St. Katherine Drexel Church to turnout for the Most Rev. Thomas Paprocki, Bishop of the Diocese of Springfield.  The parish there is operated by the Canons Regular of Saint John Cantius, further growing an informal friendship between the canons and the Knights.