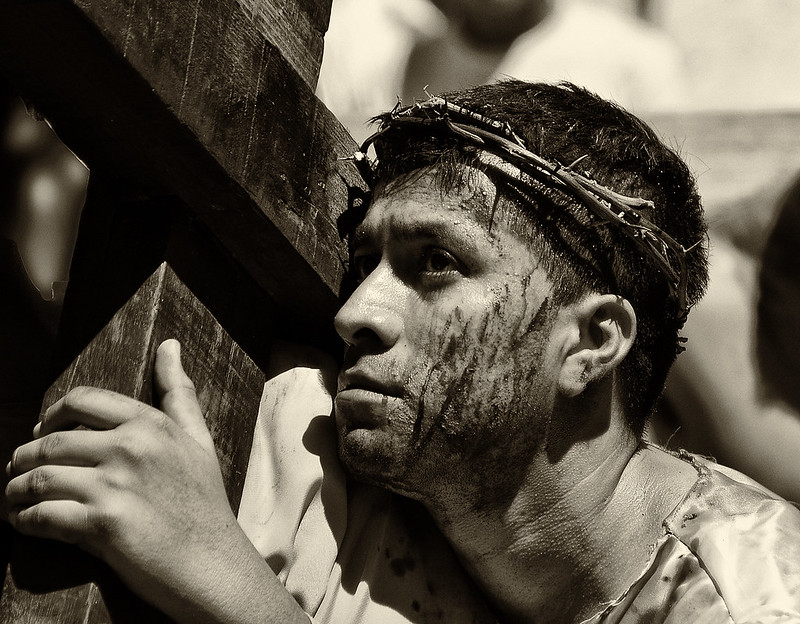 Good Friday, the commemoration of the crucifixion of Jesus Christ, a combination of the most somber day in our salvation history and the joy we experience in knowing that the Resurrection has defeated death and sin. Reflecting on the five wounds of Christ allows us to be reminded of our sinful nature and the pain caused to our soul. It also gives us the chance to renew our strength in Christ. By reflecting on his five wounds, we can renew our virtue of fortitude because Christ strengthens us.

The first two wounds that Christ endured would have been through the wrists of his right and left hands. While traditional pictures of the crucifixion show the nails through the palms of the hands, it is nearly impossible to crucify someone in this fashion, as the weight of the body would have ripped the nails through the top of the hand. Rather, if you feel the area below your wrist, you will feel a space between the wrist’s bones. It is more likely that the Roman soldiers would have pierced our Lord in this portion between the bones.

It could be plausible that the upper palm could withstand the body’s weight, but piercing through the wrist bone also ensures that no bones be broken.

The second two wounds are through the feet, where the nails pierced our Lord to hold him to the vertical beam. Often depicted on the top of the foot, archeological evidence suggests that the feet were actually nailed to the cross through the heel. There were remains found of a crucified victim, with one of the spikes in the heel.

The fifth and final wound of Jesus Christ is the pierced side. Instead of breaking the bones in the legs to hasten the death of the crucified, the Roman soldiers realized that Christ had already passed. To satisfy the crowds calling for his death, a soldier used his spear to pierce the side of Jesus, a wound from which blood and water flowed.

Many artists have depicted the five wounds in their paintings, and many movies have depicted the crucified Christ. One of the most poignant movies was The Passion by Mel Gibson. When the scene depicting the crucifixion came to be filmed, it was the hand of Mel Gibson seen in the frame, not that of any of the actors in the movie. The explanation given for this was Mel Gibson wanted to represent his sins that nailed Christ to the cross.

Thomas was the first of the twelve to experience the five wounds of Christ, for he would not believe that Jesus had risen from the dead until he himself placed his hands inside the wounds.

But it is not only these wounds that we need to consider when meditating on the final hours of Jesus Christ. These five wounds we can attribute to the death of Christ, but not the only wounds that he would have experienced.

For those punished to death on a cross, death does not come from blood loss or the wounds inflicted but from suffocation. For many, it could take a long time. Why then was it that Christ died so quick a death?

Jesus did not only suffer from physical wounds as his hours on earth came to a close. His torment started long before his arrest. Christ was in agony in the Garden before his arrest. He was under such spiritual and mental duress that blood poured from his pores as if it were sweat (Luke 22:44). He would also be tormented by the fact one closest to him would betray him.

Many would wonder if he knew what was going to happen; why would he be so distraught. Christ was as much human as he was divine, and his human nature would have been in great anguish over what was to happen, just as he wept over the loss of his friend Lazarus (John 11:35).

Once arrested, Jesus also suffered from loneliness and despair. Peter denied him three times, and most of his followers scattered out of fear of reprisal for being his follower.

At the hands of the Romans, his skull was pierced from the crown of thorns. He was beaten with a reed, derided for being the King of the Jews. Not wanting to crucify an innocent man, Pilate had him scourged at the pillar, hoping to appease the mob calling for the death of Christ.

While most depictions of the scourging show a simple leather whip, the one used to whip Jesus would have had bone fragments or rocks woven into the leather. The flesh would literally be torn from his back. When the soldiers tore the cloths from his body, they would have reopened the wounds as the fabric would have been stuck to.

By the time Christ would look down upon the world he was prophesized to save, he would have been weakened by blood loss, with barely the strength to hold on. This makes the seven last sayings of Christ all the more important. For Christ to have taken a breathe, he would have had to push himself upon the cross, further rubbing his already torn back against the wooden platform to which he was nailed.

Read More – The Seven Sorrows of the Blessed Virgin Mary